Menu
Issue 2
Issue 2
Menu
LAND-BASED FISH FARMING GOES VERTICAL
A NEW FISH FARM ARCHETYPE, DESIGNED TO USE RESOURCES EFFICIENTLY, IS SET TO ENHANCE SINGAPORE’S FOOD SECURITY.
Alakesh Dutta
SJ Architecture
Oct, 2021
View of a typical floor at the vertical fish farm showing grow-out tanks on either side of a walkway
Abstract: Interest in urban farming has grown due to the need to reduce carbon emissions associated with the production and transportation of food and ensure food security. Surbana Jurong, with the Apollo Aquaculture Group, has developed a new ecologically conscious fish farm archetype, that uses a closed loop system in the use of resources, which is a more sustainable mode of operation. The fish farm archetype has a closed-loop water reticulation system to continuously recycle the water in vertically-stacked fish tanks using a series of bio-treatment processes to sustain a high yield of fish and shrimp, as well as to grow vegetables. The modularity and scalability of the design means such a vertical farm can be set up in a basement, an empty multi-storey carpark, under viaducts and so on in any urban centre.

In recent years, city farms have sprouted up with urban farmers growing food for local consumption. This has been propelled firstly by the need to lower the carbon footprint associated with food production by bringing the production of fresh food closer to consumers. Secondly, urban farming helps to ensure a secure supply of fresh and safe food produce, in the face of constant disruptions to global supply chains due to socio-political events, economic crises and natural disasters even before the ongoing Covid-19 pandemic dealt it the greatest jolt.

The carbon footprint of food production is broadly an outcome of two contributing sources: the resources consumed to produce the food and the resources needed to transport the food to centres for consumption, particularly in high-density urban areas.

Between 2012 and 2017, farming and food systems produced about 16 billion tonnes of CO2 per year.2 For a comparative view of energy and resources that go into food production, refer to image below. 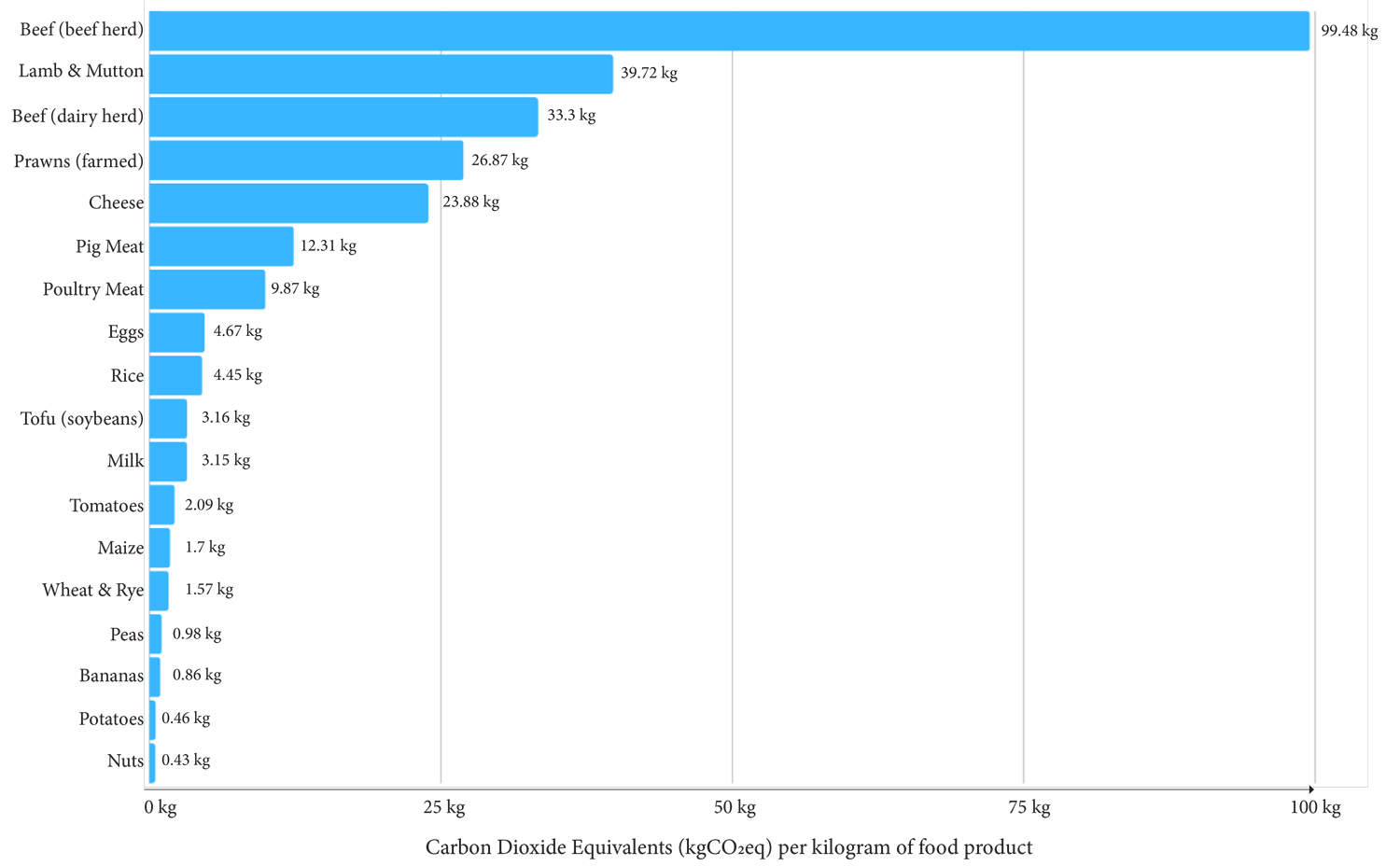 Greenhouse gas emissions measured in kilograms of carbon dioxide equivalents per kilogram of food product
https://ourworldindata.org/environmental-impacts-of-food
Moreover, the extensive resources expended in transporting food products (both fresh and processed food) over long distances means certain trade-offs have to be made for the long term.

In the case of a small city-state like Singapore, it imports almost 90 percent of its food requirements, from all over the world1. This is because the small city-state has historically prioritised land use for other vital urban purposes such as housing its growing population, rather than for farming. While 21 percent of the land was used for farming in the 1960s, this figure is less than 1 per cent in 20163. Over the past 50 over years, Singapore has moved from a position where it produced 60 per cent of its vegetables, 80 per cent of its poultry and 100 per cent of its eggs and pork to its current status where it imports most of these consumables.1

Urban farming, particularly
high-tech farming, has the potential to reduce the associated carbon footprint by bringing food closer to the centres of consumption and, increase its food self-sufficiency.

High-tech farms consume considerable amounts of energy even though they are very lean on other resources, particularly water and waste. Nonetheless, this may change as high-tech farming is still a nascent and fast developing sector with growing innovations and investments; which can result in more productive and more efficient use of resources.

Singapore itself is also leveraging such high-tech farming technologies to boost its local food production. In 2019, the government announced the 30-by-30 plan to increase local production of fruits and vegetables to 20 per cent of the demand, and that of protein from sources like meat and fish to 10 per cent.4

The vertical fish farm project by Surbana Jurong (SJ), in partnership with its client Apollo Aquaculture Group (AAG), is one such innovation that uses high-tech aquaculture system to boost the production of seafood in Singapore. While most of the innovation in vertical farming typologies has been focused on farming green leafy vegetables, SJ and AAG have created a new archetype that has successfully delivered the world’s first land-based vertical fish farm in Singapore. This is significant as the main nutrient yield here is protein, which has both a higher economic value and nutrient value in comparison to green leafy vegetables.
This archetype is founded on two key features:

Schematic section of the archetype of the vertical fish farm
After erecting a few prototype systems, SJ, together with AAG, is on track to complete the first full-scale implementation of this model at Neo Tiew Crescent in the Lim Chu Kang district of Singapore. This development has an eight-storey vertical fish farm with 12 sets of fish tanks on every floor. The project is currently undergoing testing and commissioning and it is slated to be operational by the end of the year.

This farming archetype is based upon a comprehensive systems-level integration amongst the three primary systems that are engaged by the farm to enable a circularity of flows and reduce or eliminate wastage. At the same time, it also creates opportunities for new value chains. (Refer to integrated systems map below). The spatial design and architecture of the farm works towards enabling these exchanges. The architecture is thus a facilitator of the three main systems flows and exchanges and enables their integration. These main system flows pertain to energy, water and nutrients. 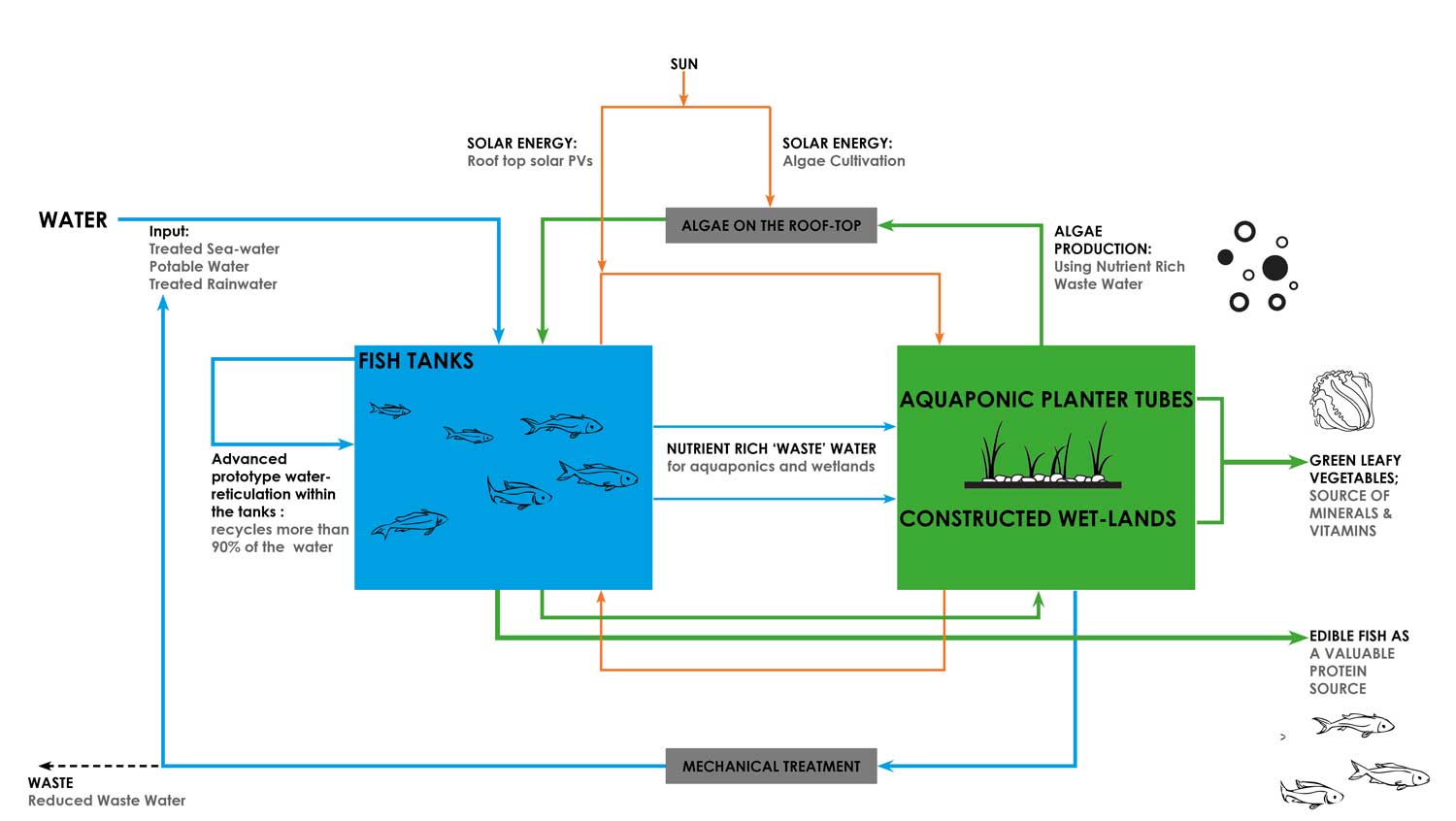 Schematic section of the archetype of the vertical fish farm

This integrated system map also lends each farm developed upon this archetype a flexibility to implement various systems or set-ups to enable all or some of these flows depending on the site constraints and other factors.

In the Lim Chu Kang development, the treatment of the farming wastewater is done by a mechanical system (owing to space constraint for nature-based systems). The nutrient-rich waste extracted from the treatment process can be used for several purposes, including as fertiliser for cultivating vegetables. There is also space created at six levels for integrating a vegetable farming system, where the water used for farming can circulate through. This will help to filter the water and enable the plants to absorb nitrogenous nutrients from the water. These spaces are also located along the perimeter to maximise the exposure of future vegetable systems to natural light; whilst the fish tanks are deeper into the plan as they do not require any natural light.
This concept of circular flow of the main elements, particularly for water, won this project, then called “Floating Ponds”, the WAFX Award for Water at the World Architecture Festival 2017. The jury stated: “This projects’ systemic integration of water, nutrients and energy leads to a concept which enables the creation of a self-sustained and closed-loop farming eco-system. Floating Ponds omits the traditional dependency on land and will enable rapidly expanding and densifying cities to build resilience through a creative use of space and water.”

To be a successful urban typology and enable increased urban food production, it is important that the farming system can be integrated into denser urban settings of various types, and not just be limited to being built on un-occupied peri-urban spaces.
This will make the ‘farm-to-fork’ concept possible and create visibility for high-tech farming amongst the community. The floating ponds archetype can be incorporated into both residential and commercial districts. It is self-sustaining and non-pollutive, and it is also free of odours – a characteristic commonly associated with fish farming.

Being visible and engaged with the community will help to create a sustained interest to eat local, fresh and healthy produce and more importantly groom the new generation of farmers that sees agriculture and agritech as viable career options. AAG is already working with local institutions to train the future farmers of Singapore. 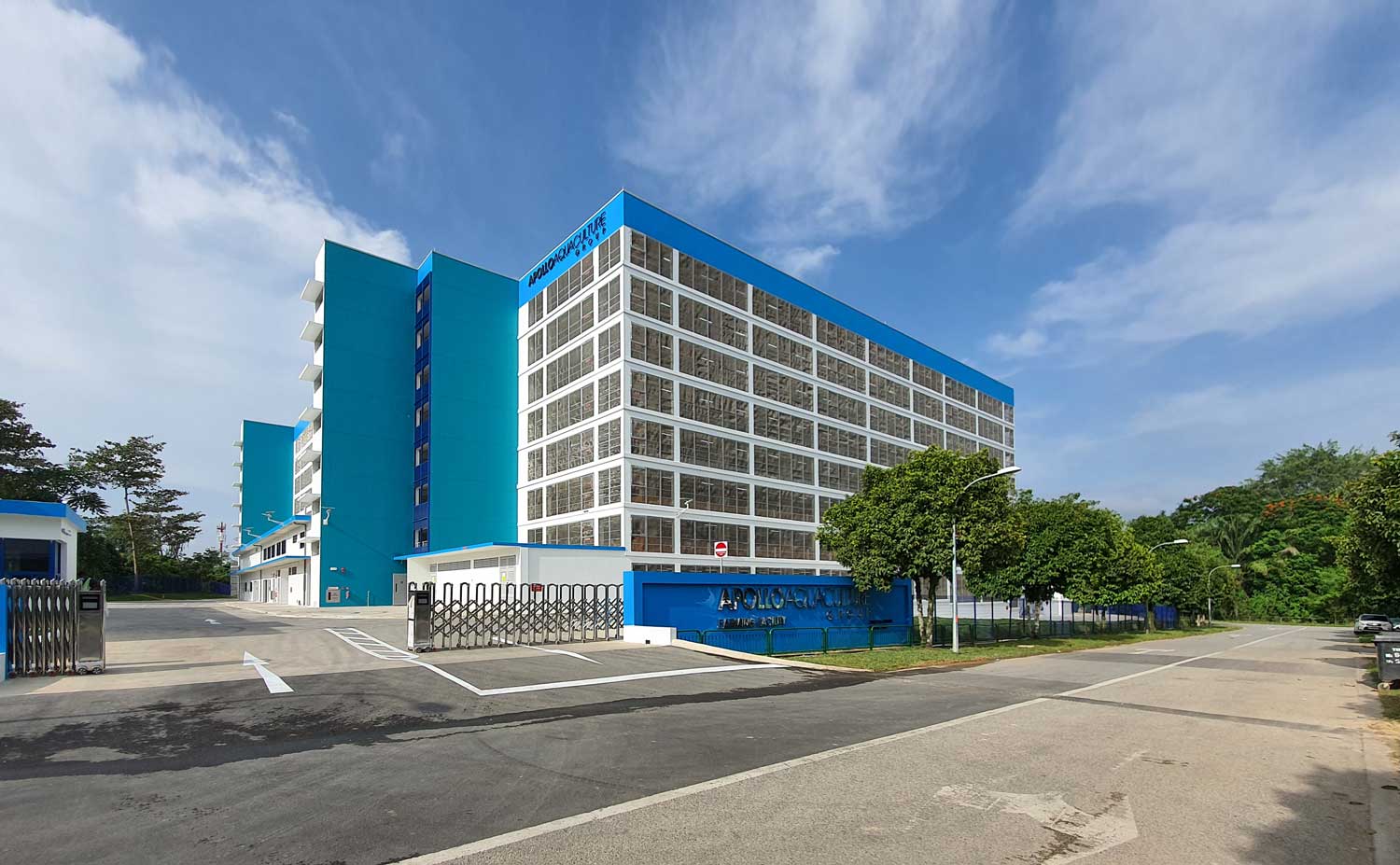