Launched five years ago, the Belt and Road Initiative (BRI) has mobilised much Chinese funds and State-Owned Enterprises (SOEs) to invest, construct and operate projects in South-East Asia (SEA), South Asia, Central Asia and even further away in Africa. Given that infrastructure in many of these countries in these regions are under-invested, the BRI represents a huge opportunity for these countries to uplift their infrastructure and build strong foundations for economic development.

An example of a BRI project is the development of a US$9b deep-sea port and industrial park in Kyaukpyu. Situated in the western Rakhine State of Myanmar, Kyaukpyu will provide Western China with access to the Bay of Bengal, and is therefore highly strategic to China. To Myanmar, the project will lead to economic development and potentially reduce some of the ethnic tension in the Rakhine state. The project is therefore strategic to both countries. The project is currently still under negotiation between the Chinese consortium leader CITIC Group[1] and the Myanmar Government. 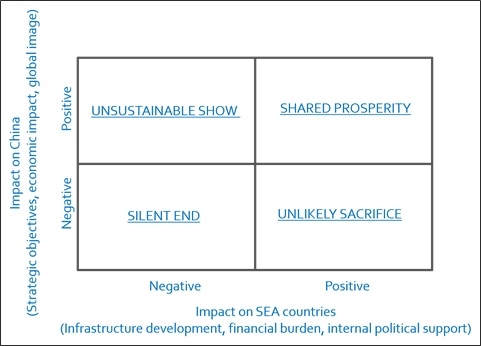 The impact will be positive for China if it is able to develop access points for its manufactured exports and its imports of strategic resources, if the BRI allows its state-owned enterprises (SOEs) to establish their market presence in SEA and if the BRI leads to a stronger global leadership role for China. However, if the projects turn out to be commercially unviable, the economic benefits of BRI for SOEs will be in doubt. Furthermore, if the BRI generates negative media for China, it will lead to a negative image for China.

How China and the SEA countries go about securing their own interests and how they react to one another’s actions will be key to how the BRI plays out.

In the longer term, the two more likely scenarios are:

The BRI creates the opportunity to build much-needed infrastructure in SEA and for strong economic development in these countries. If we do not take advantage of the BRI, and it ends up in the “Silent End” scenario, it would be an unfortunate loss of opportunity for the entire region. This should be avoided.

To help the BRI move towards the win-win scenario of “Shared Prosperity”, we can consider the following:

First, the SEA countries should each develop a pragmatic Infrastructure Roadmap. Such a roadmap should have a clear vision of what infrastructure projects are important and should be given priority within the next 10 years. It should estimate the costs of these projects, identify those that are commercially viable and those that require government support. It should examine how these can be financed without creating a budget deficit crisis for the country, including whether private sector companies can be involved in the financing, ownership and operation of such projects. It should also address social and environmental concerns in the community.

Countries with such an Infrastructure Roadmap will be in a better position to decide what projects to be pursued pro-actively under the BRI framework and what projects should be held back. In this way, the SEA countries would be able to leverage on the funds made available by the BRI to advance its infrastructure development plans, rather than take on projects that turn out to be ineffective or too costly. In this regard, glamorous large-scale projects may not always be the most impactful projects.

Second, principles of market forces should be adopted as much as possible. Feasibility studies should have realistic commercial projections, and reviewed carefully to determine if projects should be pursued. For instance, users of the infrastructure should be made to pay for the services they consume, at full costs if possible. Commercial operators of the infrastructure should be engaged on a Private Public Partnership basis if viable. SEA Governments must be prepared to help overcome political and social obstacles if the projects are beneficial to the countries.

State-Owned Enterprises from China should assess the commercial viability and sustainability of the projects before taking the plunge. While there are strategic reasons for implementing infrastructure projects, we should leverage on market forces and commercial interests to make these projects financially sustainable as much as possible.

Finally, each major infrastructure project must be supervised by a competent leader. A leader with a clear vision, good management skills, integrity and strong political support will be able to deliver the infrastructure project on time and on budget. Conversely, without good project leadership, even structurally sound projects will be badly implemented and end up as failures.

It will be useful if the BRI becomes more multilateral in its implementation. This will not be easy. Involving third countries will take time and can be complicated. And not all countries want to be involved in costly infrastructure projects. But if successfully done, this will provide an independent view of the commercial viability and risk management of the project.

When all these considerations are accounted for and proper measures put in place, the BRI will have a much higher chance of success. And the scenario of “Shared Prosperity” will become a likely outcome.

[1] Singapore design and engineering firm, Surbana Jurong was also involved in the master-planning of the industrial park.

Perspectives, developed by SJ Academy, is our platform to explore new ways of tackling some of today’s most complex challenges. We draw on ideas and opinions from our staff associates and experts across different businesses. Click here to read more about Digital Technology, Aviation Planning in Singapore, and Infrastructure Investment.