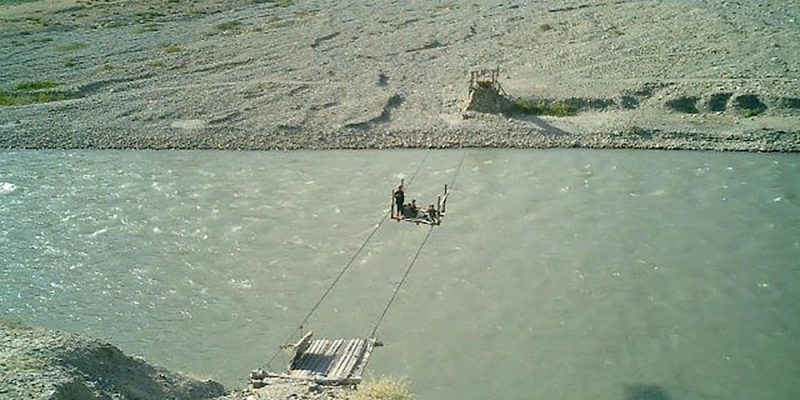 On a wing and a prayer – how locals used flying foxes to zip over the roaring Kokcha River near Faizabad in 2003, where SMEC-Bangladesh team travelled to seal a deal for a remote project that has lasted decades.

Acknowledgement: As the world battled the SARS pandemic in 2003, we were starting to implement our first project in Afghanistan. It was a time when infrastructure, banking, governance, transport, communication, education, urban services were all totally broken. I am proud that I was a member of the team that ventured into Afghanistan. This team was led by Siddique Jafar and included several others such as Ross Hitt, AHM Mahbub, Peter Banks, Jim Withington and Bob Jenkins. Of these, only Mahbub and I are still with SMEC Bangladesh, the rest has retired. Many more, most notably Zahid Iqbal (based in Kabul) and Ahsam Arshad (based in Lahore), followed us and continued with SMEC’s Afghan operation. We are still an active consultant in this fascinating country, and I would like to thank all behind the Afghan chapter of SMEC operation. This trip down memory lane is a tribute to you all.

Afghanistan was my workplace, on and off, between 2002 and 2010, as we tried to establish SMEC’s consulting business in this newly opened market.

The word “Afghanistan” may only bring to mind wars and conflicts. But it enjoyed a brief period of relative peace after the fall of the Taliban Government between late 2001 and 2005, and a respite from the decades-long wars. 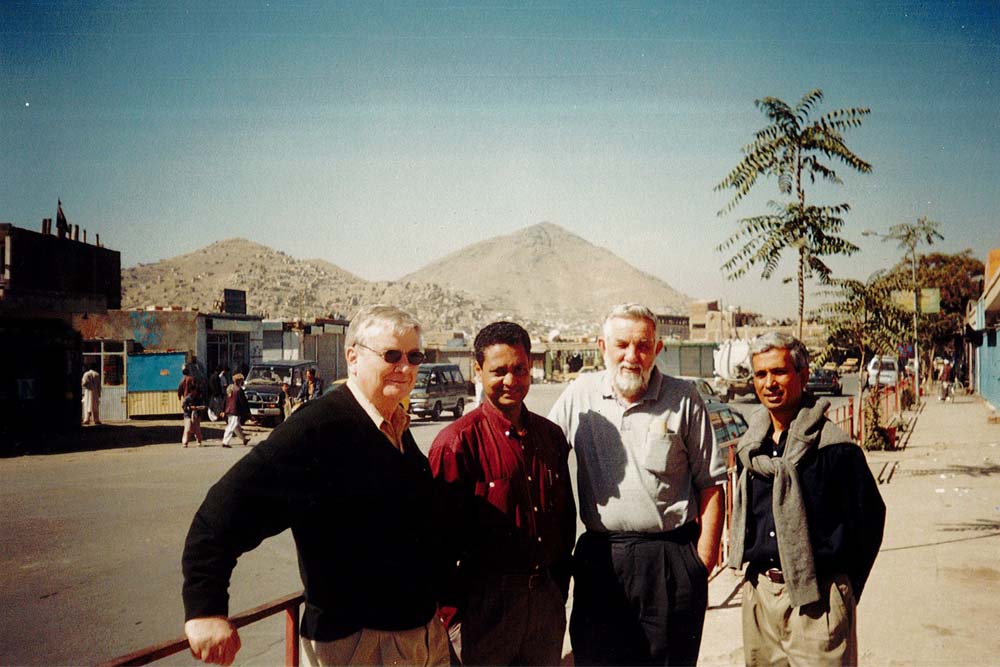 Dr Sayeed Ahmed (far right) with his team – (from left) Jim Withington, AHM Mahbub, and Peter Banks) on a street in Kabul. 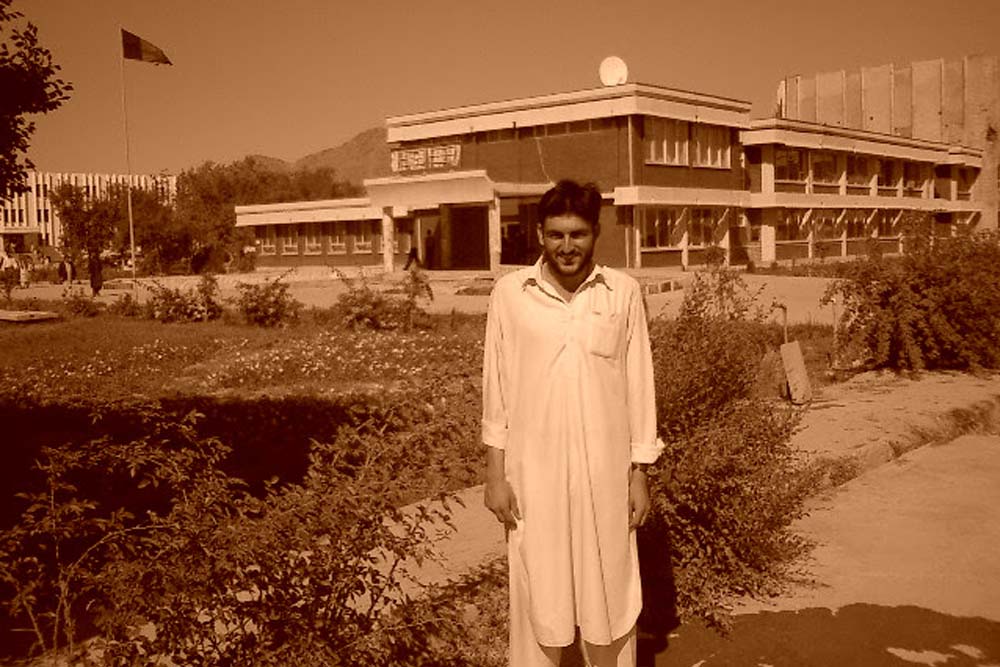 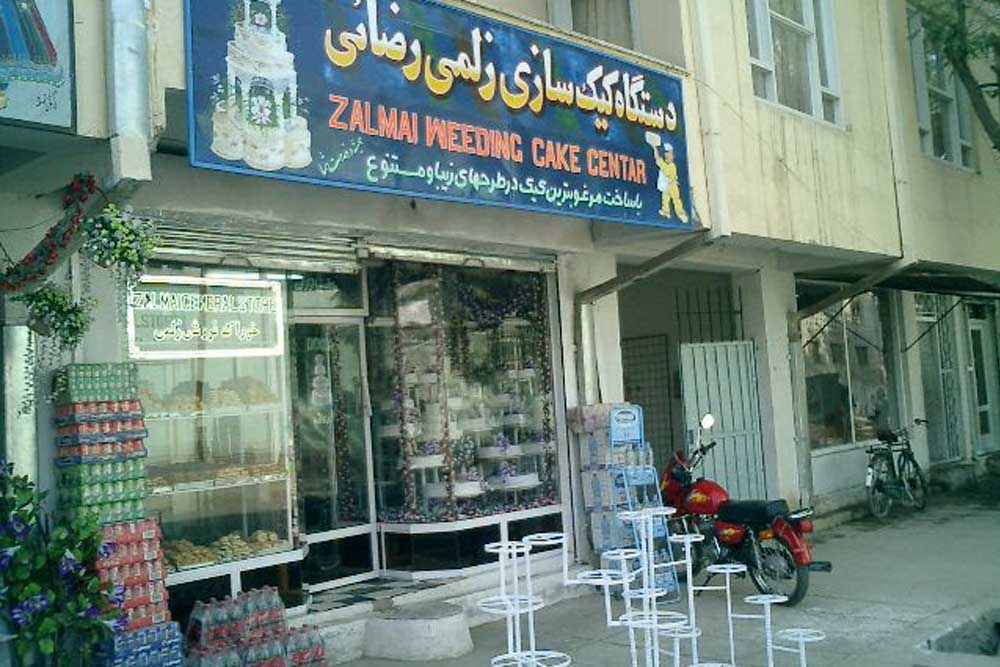 A wedding cake store in Shahre-Naw area in Kabul which saw good business after the fall of the Talibans. 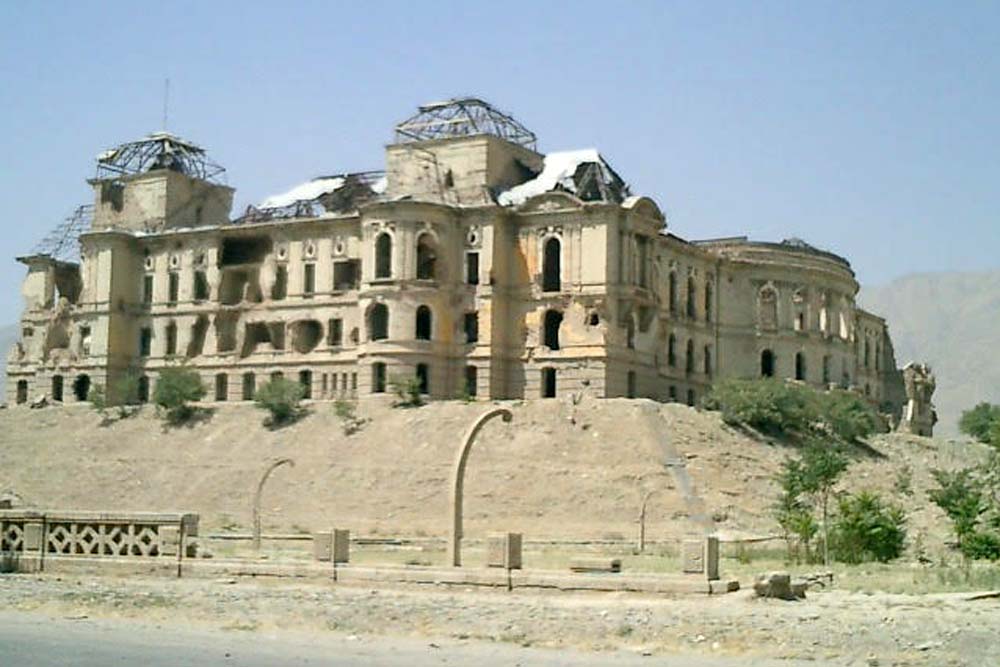 It was autumn 2003 and I was on my third visit there to start a project for the rehabilitation of a road in the remote north-east.

Kabul was an enjoyable place to be at that time. Chicken Street and the Flower Street were bustling with international visitors, mostly from NGOs and the foreign military forces, happily picking up rugs and antiques at bargain prices from the stores. People were sipping endless cups of kahwah (Afghan tea). Business was good. Crammed and rickety sedans busily plied the streets of Kabul working as taxis. We could go anywhere within the city with minimal concern about our security.

Crowded restaurants catered to expatriates around the posh Wazir Akbar Khan Road, named after the Emir. NGO workers, consultants, embassy staffers, security professionals and intrepid travellers thronged the streets. Everything was open to visitors, including the Darul Aman Palace, although it had been heavily damaged by shelling and years of neglect.  There was a clear sense of relief from the prolonged conflict.

A remote job in the northeast 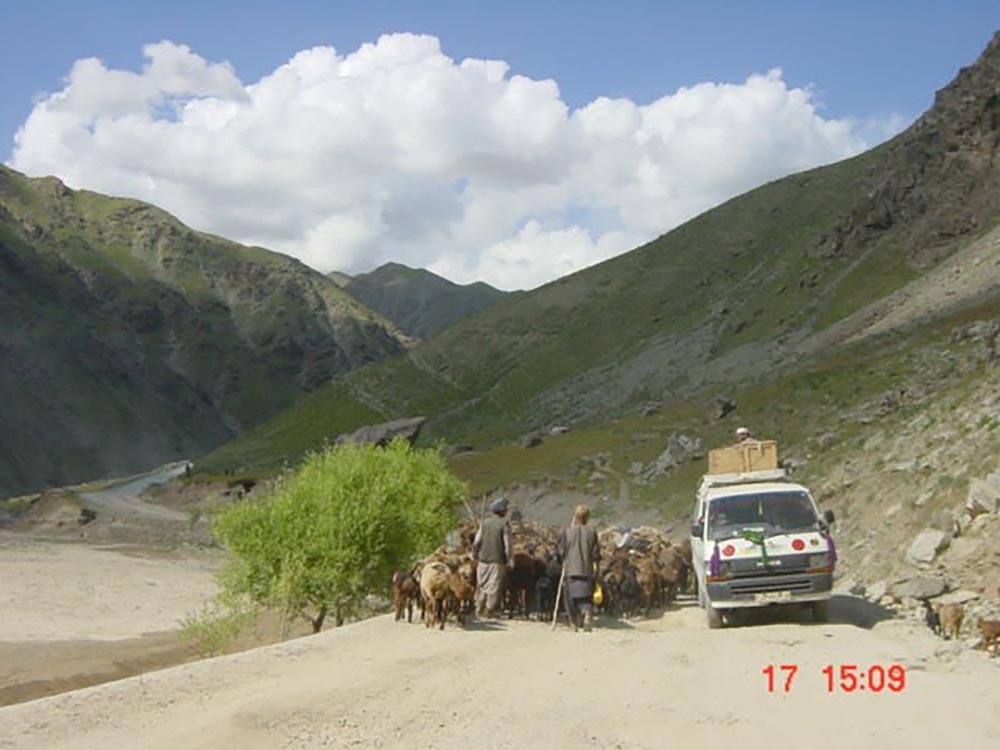 More sheep than men and some trucks – typical local traffic on the Taloqan-Faizabad Road.

I had been travelling in and out of Kabul since June 2002. In 2003, SMEC was engaged as a consultant for rehabilitation of the Taloqan-Faizabad Road under the Afghan Ministry of Public Works (MPW). At 170km long, it was winding road through a heavily mountainous region connecting two cities in the North, Taloqan in Takhar Province in the Northwest and Faizabad in Badakhshan Province in the Northeast. I was leading a team of a few engineers; one Australian and two young Afghans from the MPW to assess the damages on the road along its entire length. Our task:  Carry out a reconnaissance survey, a visual assessment of the extent of damages, and come up with a plan for the rehabilitation works.

The beauty of Faizabad 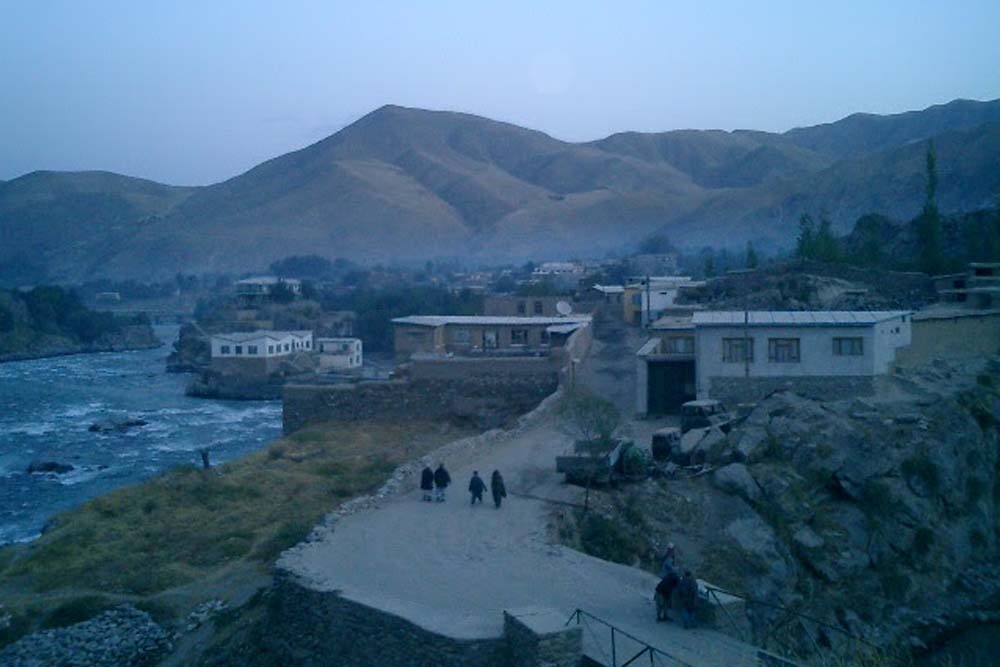 The fabulously beautiful Faizabad city at dawn with the Kokcha roaring below. View from the garden of the Marco Polo Club. 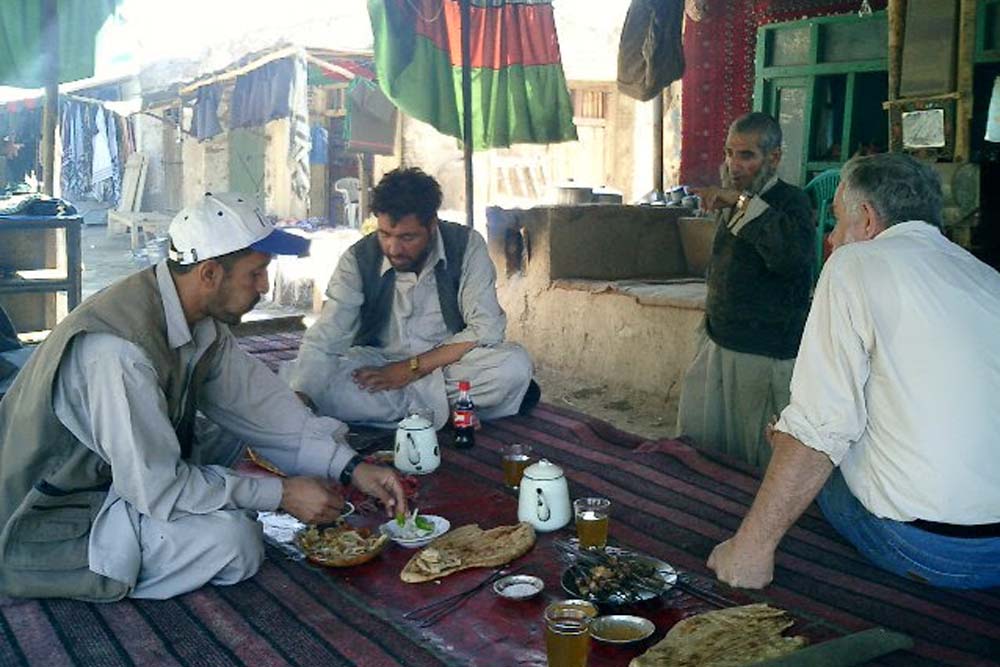 On the narrow and winding mountain road leading from Taloqan to Faizabad, we met several heavy Russian-built Kamaz lorries inching their way through the high cliff of soft rocks on the one side and a deep vertical drop on the other. The villagers nearby evidently lived on sheep herding and agricultural activities.

Faizabad was once famous for its pistachio plants covering the mountains. With the war raging for decades and several years of drought, many of them had been chopped down, exposing the soil to erosion and landslides.

Donkeys (along with sheep) appeared to be the most common animals around. They stood lazily on the road, indifferent to the world around, trotting as they brayed. Donkeys were (and I suspect they still are) the means for practically every kind of travelling and transportation for the locals. They were used for shopping trips, social visits and carrying provisions, even water or firewood. Life around here didn’t seem to have changed much over the last millennium except for the remains of tanks and other pieces of artillery beside the road, warning signs for mines and the 4WD vehicles – mostly Russian UAZ and some Toyotas – whizzing by. 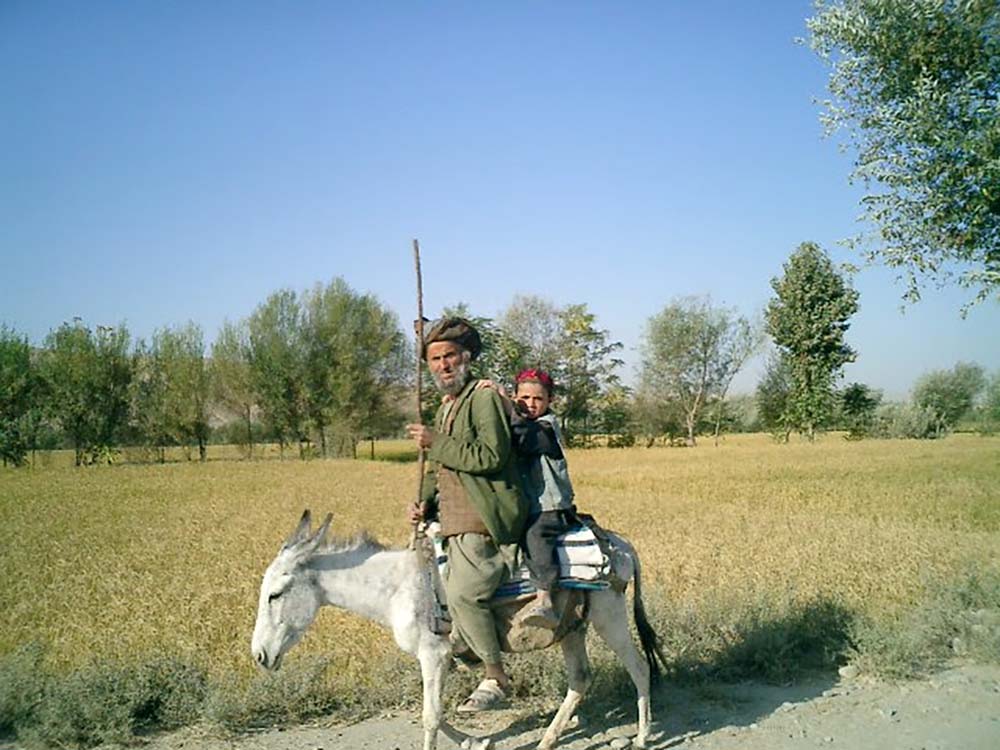 On the Taloqan-Faizabad Road, the hardy donkey is the best mode of local transport for locals.

Faizabad stunned me with its picturesque beauty. Perched on a hillside, with a roaring Kokcha river running at its feet, full of gardens with fragrant cumin plants, and framed by a clear blue sky. It was a picture-perfect place except for the very challenging poverty of the people, dusty roads and the ramshackle houses. It was October, winter was just about to set in and night-time temperatures were already hovering near 5oC, while it was under 20 in the day time. The River Kokcha came down from the hills and divided the town into new and old parts.

Kokcha originates from a lake in the Hindukush mountains near a small place called Skazar in the far North-east of Afghanistan and flows for 360km before falling into the Amu Darya along the borders between Afghanistan and Uzbekistan.

The mines of the famous lapis lazuli are located in the Kokcha valley and during the decades of war successive Afghan insurgent groups made generous use of this precious stone to fund their campaigns. The ancient Egyptians and Mesopotamian civilizations, and later the Greeks and Romans, extracted lapis lazuli from Kokcha valley mines.

We stayed at the Marco Polo Club for the night, presumably the most prestigious accommodation in Faizabad, a single-storey poorly-maintained building with about 10 rooms, located on the hill slope just above the Kokcha. There was just one very basic toilet, separate from the building and couple of metres downhill. We were told that the place was owned by the local commander.

The sleeping arrangement was also pretty basic, just a thick carpet on the stone floor and heavy blankets. The staff at the club (pronounced “kloob” by the locals, similar to “book’) treated us with a sizeable meal of large Afghan breads fresh from the oven, sizzling kebabs and chilled grapes.

We were, however, more concerned about our personal safety, as the place was full of armed men, each carrying an AK-47 and we were just a few unarmed engineers presumably carrying US dollars and satellite phones, making us perfectly legitimate targets.

As we sat over the meal, cross-legged on a rug, the owner of the Club turned up to join us, introducing himself as Mullah Faiz, our host in Faizabad, apparently beaming that these “important” people had come to his place. From his polite gesture and courteous manners, we realised that there was nothing to fear, because we were his guests, the most honourable position a stranger can hope for in an Afghan household.

That night I didn’t sleep at all. Neither did my wife back in Dhaka. BBC TV had aired the news of a shootout somewhere in Afghanistan and she was frantically trying to call just to make sure I was safe, unaware that I was contactable only through a satellite phone. I got to know about this when I called her just before dawn. On that crisp morning, I could not fail to notice the beauty of the Kokcha roaring down below as I watched it in awe from the fragrant garden of cumin plants.

After breakfast we called on the local MPW office, hoping to meet the head and seek his support for our work. To our pleasant surprise, it was the same Mullah Faiz again! We exchanged pleasantries, shook hands several times in true Afghan style, sipped several cups of kahwah and bade farewell.

Our host happily assured us of all necessary support and protection for the work. All the time, Mullah Faiz was counting through his prayer beads made with local stones and I couldn’t help but notice its beauty. Big mistake. He instantly offered it to me as a gift. Totally at a loss, I somehow managed to pick up my wit and accepted it with enough solemnity saying “I am deeply honoured by this kind gesture and will give it to my father”, which I did when I returned home. 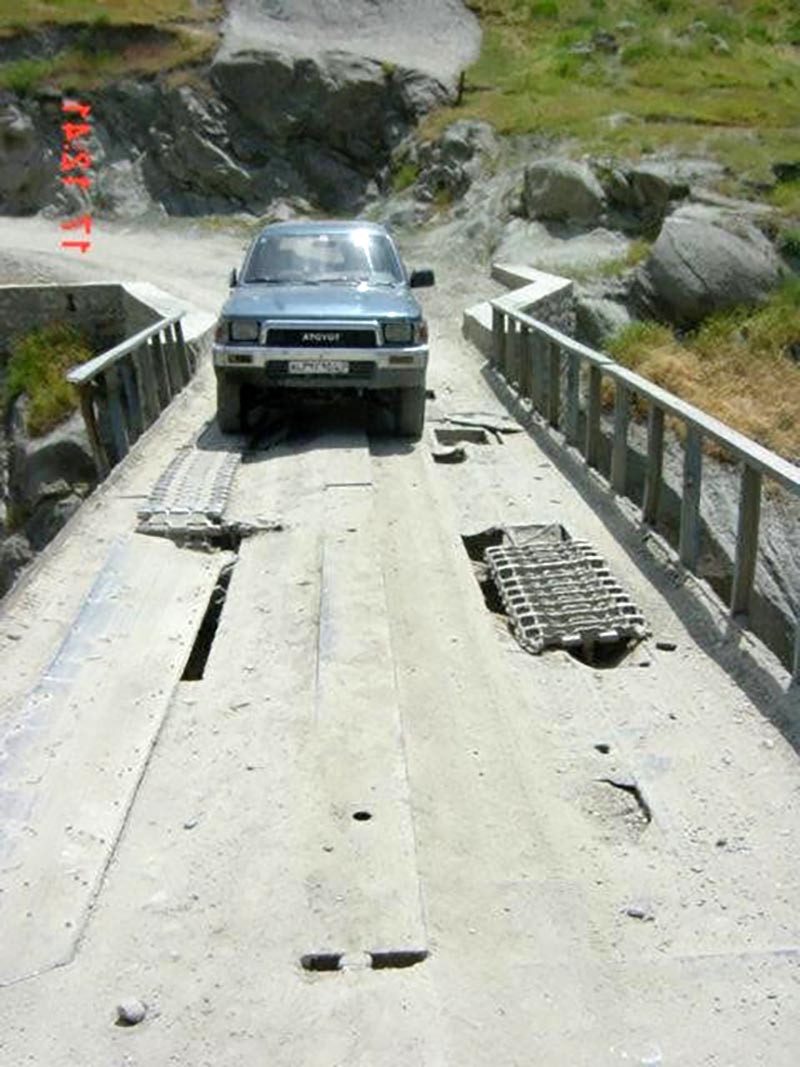 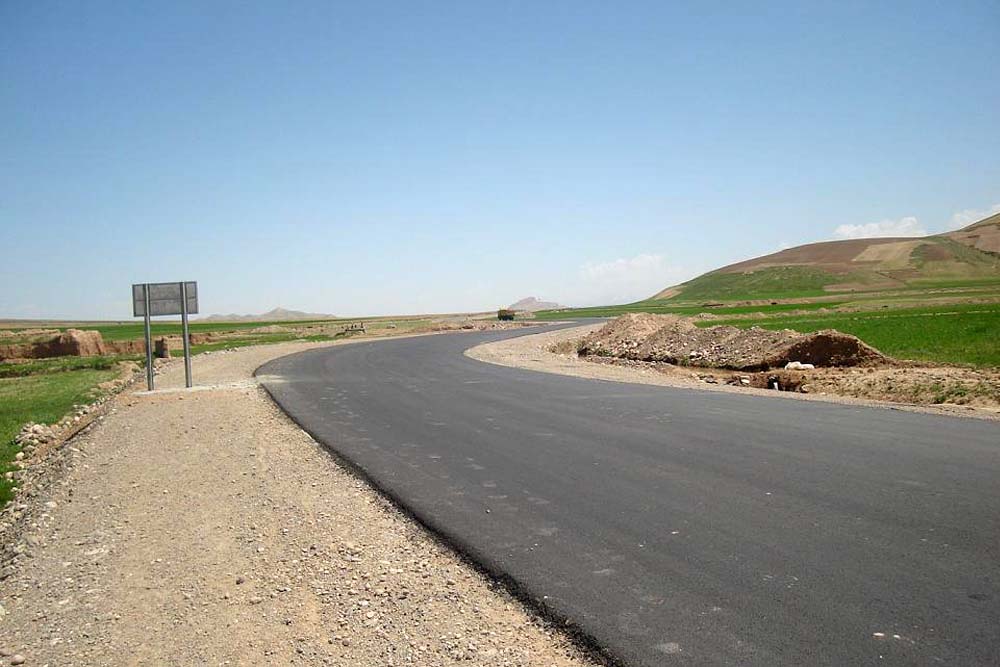 A typical section of the Taloqan-Faizabad Road after it was completed. 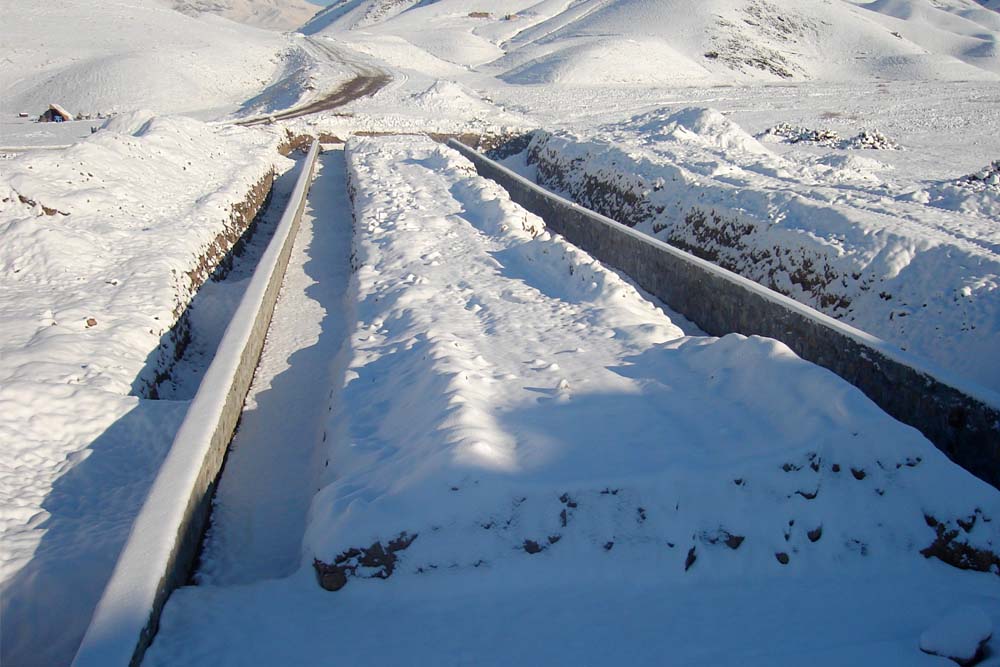 The snow-covered Taloqan-Faizabad Road-Causeway at 28km after construction in December 2006.

Faizabad is the capital of Badakshan province and its commercial and administrative centre. The province includes an area in the north-east that was assigned to Afghanistan by the British during the Great Game era (in order to create a buffer between the British India and the Czarist Russian Empire). The town is on an important trading route with Tajikistan, China and Pakistan.

Taloqan-Faizabad Road Project was initially taken up as an emergency rehabilitation project aimed only at stabilising the existing road surface and the bridges. Later on, the Afghan government decided to upgrade the link and widen the road with a better all-weather surface, for permanent and reliable connectivity with the north-eastern border town.

The work was divided into two parts:  The first 70km from Taloqan to Keshem was assigned to SMEC, with the rest to US Army Corps of Engineers. Today I am happy and proud to say that the works were completed on time and the project now serves as a much-needed linkage between these two towns. The journey from Taloqan to Faizabad is under three hours, compared to a day previously. But that was also not certain during times of snowfall, flood or landslide, not to mention the associated hazards.

Judging from the wilderness of the area and the beauty of Faizabad, I am sure it will become an attractive adventure tourism spot someday. People can visit the town and also the great Pamir Plateau. And a drive through the mountains to Kashgar and Urumqi in Xinjian Uygur Autonomous Region in China, leading to the Silk Road centres will be a trip of a lifetime.

But this will need stability and peace to prevail in the region. Only time will tell if our fair Faizabad will see that day.

According to the SMEC website, SMEC has been operating in Afghanistan since 1993 and established an office in Kabul in 2005, after successfully delivering a number of projects in the Transport, Water, Energy, and Education, Governance and Government Advisory sectors in Afghanistan.

Since then, SMEC has been involved in an integrated water resource management program for the Balkh River, community flood management improvement in the Takhar province, preparation of detailed engineering designs for a number of road rehabilitation projects, independent administrative reform for the Civil Service Commission, and the upgrade of the Salang Corridor. 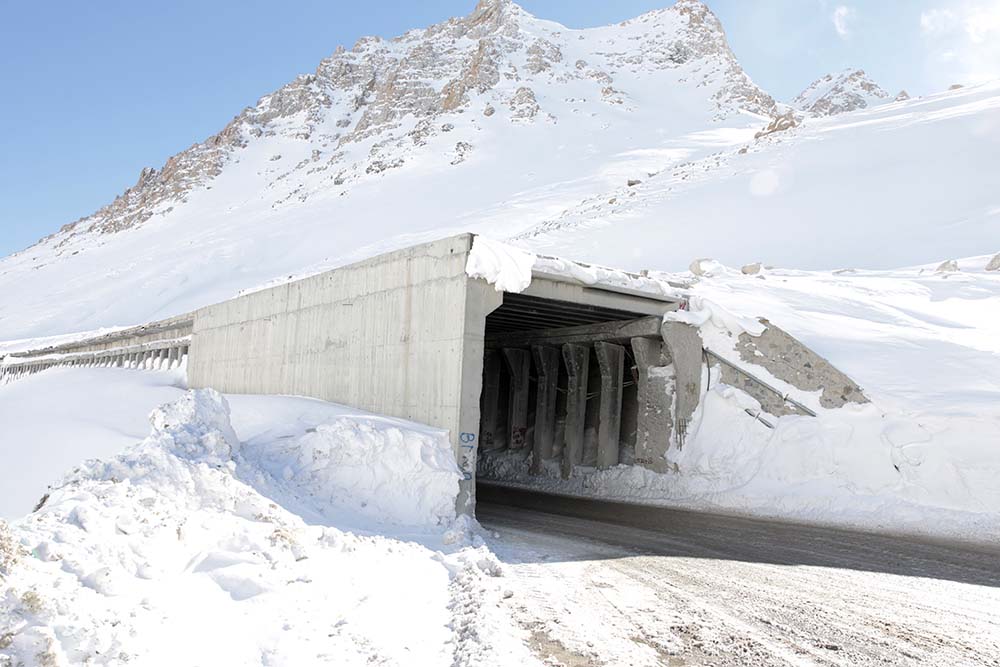 SMEC is undertaking the feasibility study and detailed engineering design to upgrade the Salang tunnel and roads. The two-lane, 2.7km long tunnel that forms the core of the corridor was built in 1964.

Connecting with new aviation markets in Europe and Asia

Matthias Olt, Design Director, Architecture, USA, from the Seattle studio of B+H is ...

Teaming up for sustainable and resilient urban development projects

Wrap and roll: New ways to protect buildings from explosions