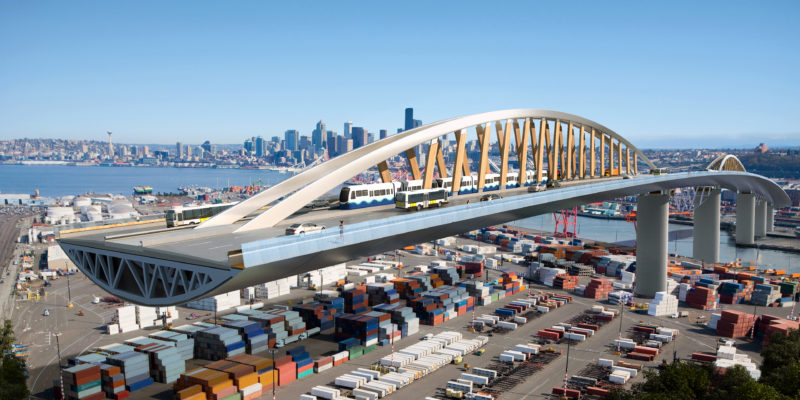 Monocle 24, the round-the-clock of culture Monocle magazine, has interviewed Matthias Olt of B+H for his take on the use of mass timber. Matthias has been in the news for proposing the use of timber wood in the building of a long-span bridge out of timber to replace the West Seattle Bridge as environmental concerns are top-of-mind for residents.

What’s exciting is that Matthias, the Design Director, Architecture, USA, from the Seattle studio of B+H is spearheading the exciting effort with SMEC and the Robert Bird Group (RBG) – all member companies of the Surbana Jurong Group.

Using timber for the West Seattle Bridge can reduce construction time and is more sustainable, says Matthias Olt. Olt is an expert in mass timber design and received a Seattle AIA Honor Award for an innovative mass timber high-rise building.

Indeed, just as the 20th century was dominated by the use of glass and steel in the construction of skyscrapers, the 21st century may be dominated by the use of mass timber, a sustainable building resource. Already, the French government has mandated that all new public buildings in France to be built with at least 50 per cent wood, and is showcasing the technology in the design for the athletes’ village for the 2024 Olympics in Paris.

The technology of mass timber has existed since the early 1990s and is basically composed of slats of laminated timber and glued together to form structural elements such as beams and columns. Matthias said that there are two sets of advantages from using timber wood. Quantitatively, wood may be more expensive but allows for a more compressed construction schedule and involves less need for onsite labour.

Qualitatively, the carbon footprint is lower and has less environmental impact. The use of wood also means architects would build more sustainably – with a more beneficial effect on occupants as studies show that humans perceive the use of wood in built environment to be more inviting than the use of glass and steel. Listen here.

View at the top

The Canada Green Building Council (CaGBC) recently announced the winners of the 2020 ...