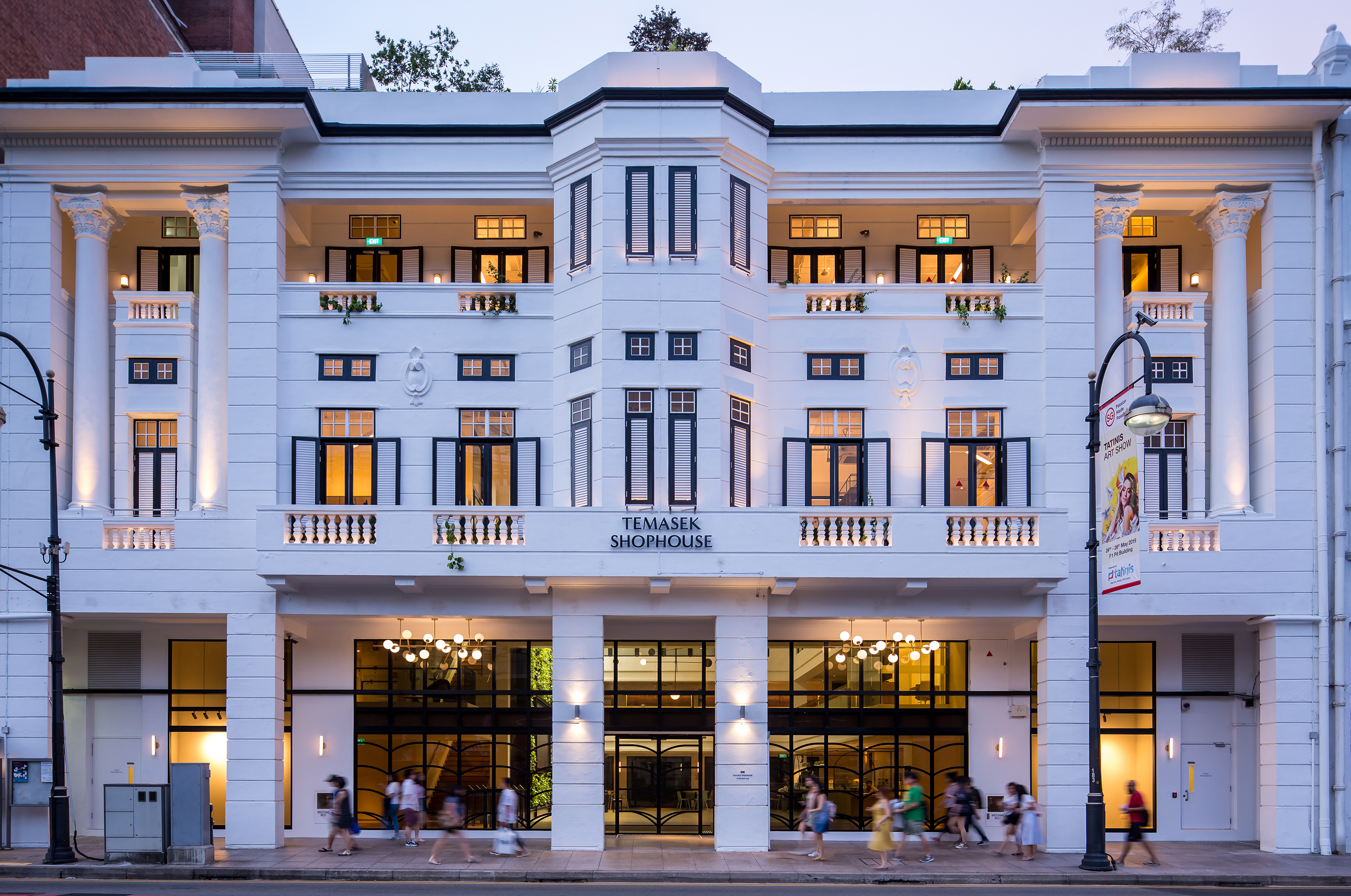 Breathing new life into one of Orchard Road’s most striking heritage building, Temasek Shophouse is home to the philanthropic arm of Temasek Holdings – Temasek Trust.

Redesigned and repurposed for modern use, Temasek Shophouse was launched in 2019 as a 25,000-sq-ft co-working hub for social enterprises and “Cradle for Social Impact”.  Awarded the prestigious Green Mark GoldPLUS Award, Surbana Jurong provided multidisciplinary consultancy services for this project, including architecture, mechanical and electrical engineering, civil and structural engineering, quantity surveying, site survey as well as sustainability and resiliency solutions.

Ivy Koh, the project’s lead architect, shares the team’s challenges in the design and construction stages, and how work had to be aligned to an additional set of conservation guideline.

Q: Describe the original condition of the building when you first started the project.

A: The building was unoccupied for seven years when we took over the site, and the condition was not at its best. However, the structural condition was not too bad except for some spalling concrete observed on the beam and walls. Most of the decorative features were still intact with some degree of deterioration, and fenestrations were falling apart.

We also noticed that the original design has been altered prior to the shophouse being granted conservation status in Year 2000. The previous occupant added a new mezzanine level and covered the rear yard which created a dark interior, with areas of low headroom. There used to be a central void in the shophouse (not original) and it was cluttered with escalators and lift shaft. The main entrance was boarded up with metal shutters (refer to illustration A).

Q: What were three major changes that had to be made to the building to adapt it to its new function?

A: Envisioned to be a “Cradle for Social Impact”, it is a space to create the presence of a philanthropic entity in downtown Orchard that serves as catalyst for social and community activism.

With that in mind, the ground level was intended to be an open multi-purpose public space, the mezzanine floor will serve as a ground for collaboration between co-working partners, and the upper levels will house Temasek philanthropic companies

The first change was to create a more inviting entrance for the public and a sense of arrival.  This was done by restoring the first storey to its original height. The five-foot way was restored to its original ceiling height (refer to Illustration B) and existing mezzanine floor slab is modified accordingly. As a result, the space became brighter and more spacious.

The second major change was reinstating the rear façade, which faces Stamford Canal. Because of its visibility from Handy Road, with relatively high footfall traffic, it is therefore an important face of the shophouse. The existing blank wall was demolished to create an open garden, with a new inviting entrance. Instead of having a fully enclosed garden, we added a gate as the new entrance (refer to Illustration C).

The third change was the reconfiguration of floor slab. The new configuration created a grand void for visual connectivity.

Lastly, we converted the unused and inaccessible mechanical roof to a new garden terrace and meeting space.

Q: What were the three biggest challenges when it came to its restoration, and how did the team overcame them?

A: The biggest challenge would have to be “site constraint”. Being on Orchard Road, there is no direct vehicular ingress to site. Orchard road is a no-stop zone and there is a permanent bus lane at the door step of the shophouse. Goods movement in and out from site was also a logistical challenge.

The Land Transport Authority then (LTA) granted approval for partial road closure during certain hours at night.  Hence, all waste disposal was done only during those hours. The rest of activities such as proper logistics planning must then be managed and implemented carefully.

The adjacent buildings were at least 60 years old, and they required thorough and continuous monitoring during construction. Additionally, the lift sits within 2 metre of the MRT 1st reserve line.

Q: Which parts of the original building were conserved and why?

A: The external architecture elements is the identity of the building. Apart from being a recognizable feature in Orchard Road, the ornamentation shows the building’s original intent. The front façade shows a blend of Neo-Classical and Art Deco style, indicating that the building might have been built in the 1920s (this is confirmed on records found by Julian Davison).

On top of the two façade, we conserved the original concrete spiral staircase. The steps and balusters were carefully restored, painted (to highlight the dynamic shape), and illuminated to create a grand elevation.

For the interiors, we restored the spatial quality by opening the false ceiling. The once covered set of fanlights now brings in more daylight and brighten up the interior space (refer to Illustration D).

Q: Describe your interior design concept for the project.

A: Given this unique site, the interior design of the Temasek Shophouse is largely influenced by the distinct Art Deco architectural style of the building. The team took this element which is reflective of its heritage and roots, and reimagined it through modern lens. The team aimed to bring across a design that is true to the building’s origin while still projecting a spirit of optimism for the space.

Upon entering the Shophouse, one is greeted with an open Atrium that links levels one, one mezzanine, through two. Being the heart of the Shophouse, this open Atrium (with a cafe on the ground floor) allows staff and users to feel linked with the community spirit and activities that happen in this voluminous event space. Anchoring the Atrium are key features of an art-deco inspired screen spanning 3 storeys, integrated with a lush green wall, which aims to bring nature closer to staff and users. A distinctively designed and large art-deco inspired light feature suspends above the Atrium.

Pockets of green are introduced throughout the Shophouse to provide encounters with nature on every level. A bright palette is selected to complement the space that lets in natural light. The design team also continues to maintain art deco design details, recognisable by streamlined aesthetics to smaller details such as signage design. Meaningful art pieces and a collection of furniture made from recycled waste materials are introduced in selected spaces to also reflect the Foundation’s values and beliefs.

Q: The building has been awarded the Green Mark GoldPLUS Award. What are some of the features that enabled this to happen?

A: Stringent selection of energy-saving M&E equipment enables the building to operate more sustainably. On top of that, we changed all the glazing to have suitable u-value and shading coefficient.

We have also deliberately designed the spaces for natural light to flow through, reducing the reliance on artificial lighting (refer to Illustration E).

The use of hybrid cooling system including conventional fans, coupled with air-conditioning system helps to reduce the total energy consumption for cooling.

Programmatically, we have designed spaces for a sustainable lifestyle as well. There are green inspired arts, recycling centre, as well as sensor-activated lighting for restrooms and staircases.

Q: Finally, what are some of your advice that you would give to designers embarking on conservation projects?

A: A thorough study and examination of the existing building design and history is important. It serves to guide the design intervention. One should be respectful of the original design intent and spirit of the architecture. However, conservation is not about restoring the building to its original design. The design should focus on enhancing the heritage value of the architecture and make the building spaces relevant to current times. With that, the longevity of the building could be extended.

Temasek Shophouse has been conferred the 2019 Award for Restoration at the URA Architectural Heritage Awards, that recognises exemplary restoration of gazetted heritage buildings.

Special thanks to the following divisions which have provided multidisciplinary consultancy services for this project:

This article was first published in Design and Architecture and is edited by SJ Academy for Perspectives, Surbana Jurong website.

Landscape Architecture – Is It a Walk in the Park?