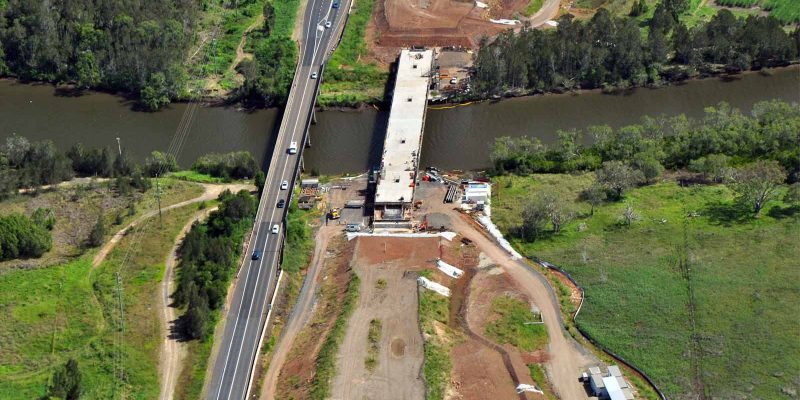 This is an aerial view of the Ballina Bypass. Built on soft soil, the project allowed Dr Kelly and his team to introduce the use of vacuum consolidation techniques to road construction.

SMEC’s Dr Richard Kelly, Chief Technical Principal – Geotechnical Engineering was awarded the prestigious 2019 Roads Australia Award for Technical Excellence.  Dr Kelly is known for his innovations in soft soil engineering and has significantly contributed to the improved design and construction of roads on soft soils.

Notably, Dr Kelly delivered the Ballina Bypass from concept design in 2005 to road opening in 2011, and led the creation of the National Soft Soil Field Testing Facility in Ballina with the University of Newcastle in 2013. As transport corridors stretch across locations with extremely soft and poor-quality ground, Dr Kelly’s innovations helped the engineering industry overcome major design and construction challenges posed by these highly variable soils.

Innovation on the Ballina Bypass

The A$560 million Ballina Bypass project extends from the Bruxner Highway to Ross Lane, and is part of the Pacific Highway upgrade between Hexham and the Queensland border. The Ballina Bypass introduced the vacuum consolidation technique to road construction in Australia, cutting construction times from an anticipated 15 years to about 3.5 years.

Dr Kelly worked with the University of Wollongong to develop new design methods for vacuum consolidation – leading to an illustrious decade during which he lectured, conducted workshops, wrote and researched extensively on the complexities of soft soil engineering.

The result: The National Soft Soil Field Testing Facility (NFTF) allowed geotechnical engineers to extensively characterise Australian soft estuarine clay and to carry out monitored field tests that can be forecast or back-figured, using the extensive characterisation data, to improve engineering design methods. The NFTF ran a numerical prediction symposium a few years ago. Lessons learnt were published  for the benefit of engineers.  Some of these have been adopted in Australian practice.

With more than 25 years of experience as a Geotechnical Engineer and academic, Dr Kelly is an active communicator of his findings. He tells SJ Connects how his work has mitigated the risks of building on soft soil, a vital issue as the industry gets to grips with the impact of climate change.

Dr Richard Kelly (left), who won the Roads Australia Award for Technical Excellence for 2019, is most proud of the Ballina Bypass project (right) along the Pacific Highway Upgrade.

1. What are the common misconceptions about soft soil that builders may have when building transport corridors like railroads, bridges and tunnels?

Often long-term conditions vary from expectations by some amount, and that can lead to pavement and structural distress – a question of risk. The behaviour of soft soil is also more uncertain than most geological materials.

Builders may think that they can come up with a win-win solution in soft soil – but the answer is usually no. You can’t have a low cost, high quality and quick outcome. Usually if you don’t want to spend money then it’ll take more time or lead to reduced quality. A shorter turnaround time with high quality is going to attract higher cost.

2. What is an example of a common unanticipated problem with soft soil and how does it impact buildings?

The strength and stiffness of soft soil are highly non-uniform and vary with load. Permeability can vary by an order of magnitude which can speed up or slow down the construction. The material strength and stiffness are strain rate dependant, meaning that its performance depends on how fast the ground moves. It impacts how quickly buildings can be built and how much ground improvement is required to construct the building.

3. Can you describe how your work prevented or mitigated any accidents / close shaves that you can disclose?

Typically, an instrumentation and monitoring plan is adopted with Soft Soil Engineering (SSE).  The idea is to maximise the rate of construction whilst managing the risk of something falling down. For instance, on the Ballina Bypass project – we built embankments rapidly and pushed the boundaries of embankment stability to increase the pace of the construction, and used the instruments to prevent any failures occurring. (Editor’s Note: The Ballina Bypass was one of the early projects on the Pacific Highway Upgrade in Australia. As with all major infrastructure projects, it was essential that this project met both technical requirements and project deadlines.)

4. What solution have you proposed over your career that you are most proud of?

I am proud of the entire Ballina Bypass project.  We used many and varied ground techniques to optimise the balance between time, cost, risk and quality and so on, including vertical drains, vacuum consolidation, dry soil mixing, stone columns, dynamic replacements, and driven timber piles (individually or in combination). The ultimate outcome was that the project was delivered on budget, and six months early.

The vacuum consolidation technique was introduced. This is a Soft Ground improvement process that has benefits of reducing the quantity of “fill” materials while improving the stability of the fill during construction. At the Ballina Bypass, a concept design without vacuum consolidation (VC) would have taken an estimated 15 years of construction due to stability problems.  With VC, we could complete this within three years.

Challenges on the 11.5km Ballina Bypass (2008-2012) on the 657-km Pacific Highway Upgrade along the east central coast of Australia:

5. How do climate change and sustainability issues impact interest in soil conditions in the countries SJ and SMEC operate in?

Optimisation of ground improvement solutions and infrastructure performance criteria will be required to protect existing infrastructure and to construct new infrastructure in a cost- effective manner. It’s important to manage this risk in the future, particularly with a flood plain in soft soil.

6. Some coastal territories have plans to protect coastal defences by using dykes or polders along the eastern coastline. What do you think of this?

Dykes or reservoirs will help protect existing low-lying buildings but Hurricane Katrina showed that dykes can be breached and low lying areas flooded. Climate change will also generate more hurricanes.  One alternative is to build up the low-lying areas – essentially land reclamation – which will trigger settlement and possibly instability in areas with soft soils.  These will then have to be dealt with or managed.

7. What’s next for engineering on soft soils?

The whole instrumentation data could be processed using ‘big data’ Bayesian statistics techniques (Editor’s note: statistics used for drawing inferences from sparse data), which would enable engineers to make decisions earlier in the construction programme with confidence. The performance of the works will be known early enough to take advantage of better-than-expected behaviour and remediate worse-than-expected behaviour in the most cost-effective manner.

A light at the end of the tunnel