As China continues to encourage the development of more ‘characteristic towns (特色小镇)’ across the country, Sino-Sun Architects & Engineers organised a roundtable in Beijing recently to discuss the concept of such towns. About a dozen industry partners participated in a robust discussion. Sino-Sun is one of China’s leading voices in developing these unique towns.

Here, Michael Xu Jianwei, President of Sino-Sun explains the concept behind this development: 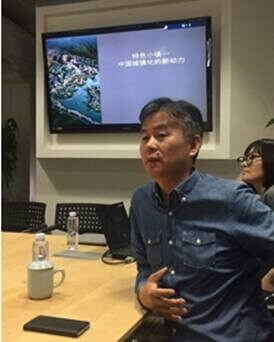 What are Characteristic Towns?

The concept originated in eastern Zhejiang province, as a way for towns to restructure and reform economically. It makes sense to cluster similar businesses together to foster industry growth and to attract resources and investment.

The successes of these towns have led to plans for more.

Are these just industrial zones?

No. Other than having a central industry theme, the concept of ‘township’, with residential areas and amenities and services to support the community, is important too. The towns are also built with great consideration to environmental protection and cultural preservation.

Some of these towns have also developed into tourist attractions.

One of China’s ‘Characteristic Towns’ in Guangdong designed by Sino-Sun.

What do you think of such developments?

One of my laments has always been that many big cities have lost their identities, with no differentiation in architecture and no attention paid to culture when designing buildings. And in their rush towards development, many historical landmarks were lost.

So I think it is great that the government, in developing these towns for economic purposes, have also paid great attention to the architectural aspects, and also in preserving the heritage of the various places.

With proper planning, economic progress can go hand in hand with cultural and environmental preservation.

A geo-economic perspective of the ‘Belt and Road Initiative’

A consortium comprising B+H, 3XN and Zhubo Design was selected as the winner in an ...

How technology influences urbanisation and liveability in city development