Menu
Issue 3
Issue 3
Menu
THE ROAD TO DECARBONISATION
WALKING THE TALK: HOW THE SJ GROUP FIGHTS GLOBAL WARMING
Jason Dane REEVE
Sustainability and Resilience Office – Surbana Jurong
November 2021
Abstract: The built environment sector needs to cut the carbon footprint in all its value chain in order to limit global warming by 2°C by 2050. Companies in the Surbana Jurong Group are not just signatories to the World Green Building Council’s Advancing Net Zero commitment, we have delivered exemplary environmental designs such as SDE4 in Singapore and the Joyce Centre at Mohawk College in Canada. Our architects and other specialists also need to use every opportunity to advocate carbon reduction through intelligent massing studies, structural design options, material optimisations and the service life of systems as well. We also need to prevail on material suppliers to find and use new ways to reduce embodied carbon. A prime example is CarbonCure, a concrete which introduces recycled industrial CO2 into the fresh cement mix so as to “lock in” carbon.

The Intergovernmental Panel on Climate Change reported earlier this year that humans are unequivocally responsible for climate change due to greenhouse gas (GHG) emissions. Only with drastic cuts to anthropogenic emissions can we limit global warming to 1.5 to 2°C by the middle of this century. Global warming is due to the GHGs – so called because they trap heat in the atmosphere. The Kyoto Protocol mandates for the regulation for six categories of GHGs, including carbon dioxide (CO2) and methane. These are all expressed as equivalent global warming potential of carbon dioxide, CO2e. Therefore, if we can account for GHG (sometimes simply referred to as “carbon”) and reduce the carbon footprint in the value chains in our sector, we have a chance of limiting warming.

Practising What we Preach

To set the trend in this, the World Green Building Council (WGBC) had called for industry to make the Advancing Net Zero Carbon commitment. Within the Surbana Jurong Group, Surbana Jurong Pte Ltd, Atelier Ten , and B+H are all signatories, meaning that 22 of our collective office spaces will be net zero, by 2030, for operational carbon. Robert Bird Group (RBG), another member company, has also taken the bold step to commit to the Science Based Target Initiative, pledging to measure and report that their operations are on the 1.5°C trajectory.
Whilst the Group is seen to operate sustainably, an equally important part of the WGBC commitment concerns advocacy. As architects and consulting engineers, the SJ Group of companies can continue to address net zero carbon. To date, the member companies have delivered exemplary environmental designs.
•  In the UK, Atelier Ten was behind the World Wide Fund of Nature’s Living Planet Centre, achieving BREEAM Outstanding in 2013.
•  SJ exported its expertise to the Low Carbon Living Lab as part of the Tianjin Eco-City in China.
•  In 2018, SJ delivered National University of Singapore’s award-wining School of Design and the Environment 4, Singapore’s first new-build    net-zero energy building.
•  B+H was the architect behind Library and Archives Canada Gatineau-2 project, which was  net-zero carbon,
•  B+H were also behind the Joyce Centre at Mohawk College, featured earlier in the SEEDS Journal.
•  SAA’s recently completed project in Singapore, the Eastlink I & II @ Canberra, was able to achieve  one of the lowest ETTV (Envelope    Thermal Transfer Value) of less than 30 W/ m2

Surbana Jurong Pte Ltd, Atelier Ten, and B+H are all signatories, meaning that 22 of our collective office spaces will be net zero, by 2030, for operational carbon.

Design Tools to Further our Targets

The best way to reduce embodied carbon in our sector, would be to reduce and optimise existing assets, using low carbon design guidance and calculation tools. 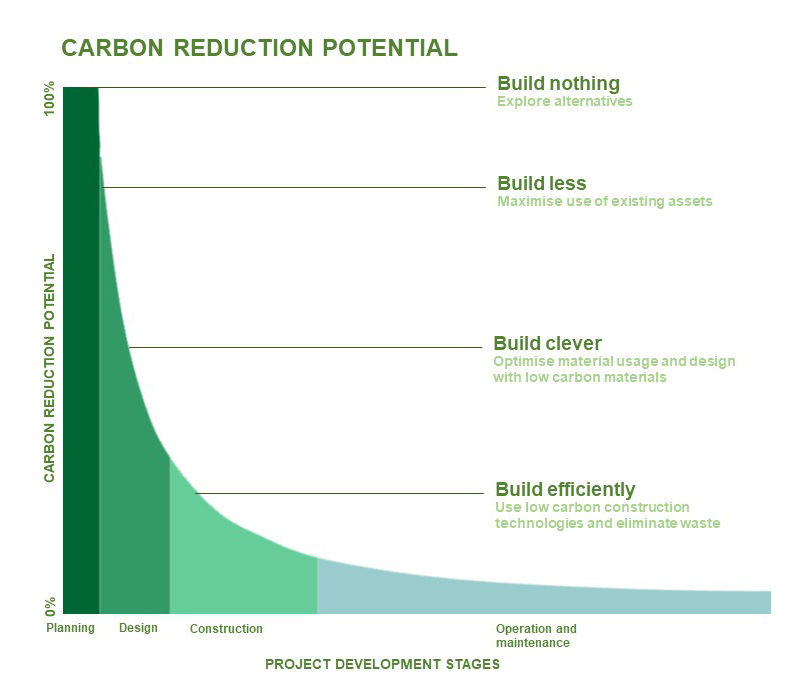 The potential to reduce embodied carbon diminishes as a project moves from planning to operation (Source: HM Treasury: Infrastructure Carbon Review, 2013)
Furthermore, as designers, we can refer to the guidance given in EN 19758 and the Royal Institution of Chartered Surveyors (RICS) Whole Life Carbon Standard to define and optimise carbon throughout the asset life cycle. This includes optimizing the embodied carbon associated with extraction of raw material, the manufacturing of building products and transport to move these materials.
As designers and specifiers, we have a number of tools to take some ownership in the so-called “value chain” carbon emissions, including cloud-based software “OneClick LCA” widely used in Europe, the “Embodied Carbon Calculator for Construction (EC3)” and the Revit plug-in “Tally” which are based in North America, and “eToolLCD” from Australia.
Some of this software can take simple sketch-up models, or gbXML files, to return some high-level life cycle carbon reports, allowing for different concept design options to be compared upfront. These might also consider the massing appropriate to the site, before the design team settles on the concept to take forward.
The software also draws from ever-expanding third party assured libraries of materials to help designers make more informed choices about embodied carbon. All the while, suppliers are undertaking life cycle assessments of their building products to ISO 14025 or EN 15804 to provide some third-party assurance of the carbon footprint of their goods, usually providing a certified Environmental Product Declaration (‘EPD’ for short) to allow for some comparability between materials or architectural systems.
In fact, the WGBC also runs the campaign to “Bring Embodied Carbon Upfront”. Our member companies should seek to advocate carbon reduction through intelligent massing studies, structural design options, and material optimisations. The design could well consider the service life of the systems too, including maintenance, disassembly and the end-of-life recovery options.

Artist’s Impression of the upcoming Surbana Jurong Campus in Singapore
As for the material selections, we can advocate for the biggest suppliers to seek out EPD’s for their local plant and factories and look to new and innovative ways to reduce embodied carbon.
For example, SJ Campus in Singapore; as well as the Joyce Centre for Partnership and Innovation at Mohawk College and Markham Community Centre in Canada utilised CarbonCure, a concrete which introduces recycled industrial CO2 into the fresh cement mix so as to “lock in” carbon. As this carbon mineralises, it even imparts greater compressive strength, meaning that less volume of concrete needs to be poured overall.
As an alternative to concrete, the AMS Nest at the University of British Columbia project used cross laminated timbers in a beautifully aesthetic way; and mass engineered timbers are proposed for the West Seattle Bridge.

SJ Campus in Singapore; as well as the Joyce Centre Mowhawk College and Markham Community Centre in Canada utilised CarbonCure, a concrete which introduces recycled industrial CO2 into the fresh cement mix so as to “lock in” carbon.

The Group accounted carbon in its own operations for the first time in 2019, and as a Group, fared favorably in the AEC sector. Indeed, this exercise paved the way for the Group to issue the first public, SGD-denominated sustainability-linked bond in South East Asia in early 2021, tied to reducing our own operational carbon footprint. As green bonds and sustainability-linked bond issuances look set to grow in debts and capital markets all over the world, the Group is proud to have aligned its financing options with its overall vision for sustainability.
However, carbon accounting is just the beginning. The Group is currently looking at the wider environmental, social and governance (ESG) landscape across the global footprint to develop our inaugural Group Sustainability Report.
We believe that looking into our human capital and governance shall help us to continually attract the best talent, impactful investment and like-minded business partners. It will also challenge us to think how we can design our services and assist our clients to achieve their own reporting obligations and help them embark on their ESG journeys.

SJ Group is currently looking at the wider environmental, social and governance (ESG) landscape across the global footprint to develop our
inaugural Group Sustainability Report.

SJ Group is currently looking at the wider environmental, social and governance (ESG) landscape across the global footprint to develop our inaugural Group Sustainability Report.

The SEEDS Journal, started by the architectural teams across the Surbana Jurong Group in Feb 2021, is a platform for sharing their perspectives on all things architectural. SEEDS epitomises the desire of the Surbana Jurong Group to Enrich, Engage, Discover and Share ideas among the Group’s architects in 40 countries, covering North Asia, ASEAN, Middle East, Australia and New Zealand, the Pacific region, the United States and Canada.
Articles at a glance
Previous
Next